Former KTN Journalist and currently Nyali MP Hon. Mohammed Ali and Embakasi East MP Hon. Babu Owino were on Citizen Television the other day, talking about the need to move on and serve the people without personal attacks, political grudges and revenge missions. This interview was one of many where politicians have been calling for unity and “forgetting the past” without really focusing on the huge financial dent that the daylight robbers in government circles are making.

Just a reminder that the latest departments to suffer in the list of daylight robbery of public coffers include The National Youth Service, the National Cereals and Produce Board, The sugar industry, The department of Health among many that we may not know going on even now. These are important departments that affect millions of Kenyans and continued pilfering of government economic resources can only lead to destruction of lives and overall economic meltdown.

For a long time now in our country, the common citizen has been treated to nothing but circus of media briefings, TV show interviews and political utterings at funerals that just target individuals in either a good or malicious way without the development of solutions and recovery of resources being achieved.

Bishop Eliud Wabukhala’s Ethics and Anti-Corruption Commission (EACC) does not seem to step their efforts much in properly investigating and prosecuting those who are found culpable of taking away millions from Kenyans. For how long are we going to continue with the blame game and the merry-go-round when serious issues of leadership come to the table? How shall we put to rest the never ending saga of massive looting within government and stop corruption ones and for all?

Kenyan’s are always in the campaign mood, one election ends and another campaign begins immediately. Politicians do not care much about accountability so long as they can raise money for their next campaigns and gain grounds for political witch-hunt on their opponents. When shall we ever focus one development alone? 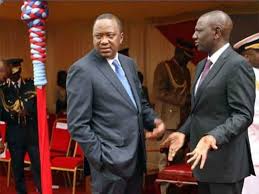 President Uhuru Kenyatta’s latest move, while it may receive applause from several quarters of the Kenyan fabric, does not really solve the root-cause of corruption but just makes it look like he is doing something about it. The questions abound: This lifestyle audit. Who is it targeting? Who is involved in doing the auditing? Are they independent of the influence of those in power, even President Uhuru Himself?

Is the Parliamentary Public Accounts Committee doing its job well or is it just another stamping organ that endorses everything that comes out of Harambee Avenue? And why is the opposition all of a sudden jumping on to this bandwagon without first of all questioning the way it is being done? Hon. Raila Amolo Odinga, just before the last elections, had several series of Press conferences outlining and revealing every kind of scandals that are in the dark. Why has this stopped? Has his networks within the government been fished out or was the handshake actually a hand-check?

Kenya is on an economic slippery slope. For sure we need to slay the dragon of corruption now. But unless we are honest about our methods and intentions to fight it, this may just be another move putting the peace and security we Kenyans enjoy in jeopardy. Here are the facts: Private Tenderpreneurs suckling resources of the Kenyan government are known, Politicians stealing from the government are also known but no one is willing to point fingers with evidence, take them to court and make sure they receive their due punishment. The Director of Public Prosecutions, The Attorney General’s Office and The Department of Criminal Investigations know who these people are but cannot do their jobs well because of undue influence from the high executive offices of the land.

Our problem, again and again, is not with our institutions, our problem is with our politics; because those heading these institutions in one way or another receive their positions as a result of influence from the executive. We get it right with how we choose serious leaders; we will get it right with everything else, including corruption. A new system of electing leaders who can strictly adhere to the constitutional provisions and promote strict, strong independent prosecutorial institutions is needed. This new system may be the salvation that Kenyan’s have been waiting for.

A government sanctioned lifestyle audit is just patching a smelling, rotten cancerous wound that clearly needs radical surgery. It’s not and can never be a permanent solution to corruption. Let’s find a proper way of electing serious accountable leaders and the problem of corruption will disappear. To defeat corruption, independent systems that demand absolute accountability must be more powerful than people. And that starts with electoral systems, which is not the case in Kenya as per now.